For years industry pundits have been trying to figure out how to remain relevant and engage newspaper readers across the world. We have had publishers try the Berliner format, web reductions, stitched tabloids, eliminating distribution on specific days of the week, and in fact, some going all the way to eliminating the printed edition altogether.

The Columbus Dispatch is ready to debut its new format – the compact broadsheet - on January 28, 2013. 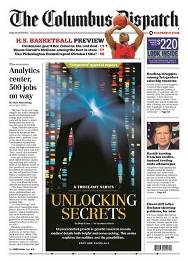 In Columbus, when approached with what the industry now refers to as the innovative “three-around” technology, we went straight to the consumer. Our readers overwhelmingly embraced the idea, loved the ease of use, portability and the colorful layout. Extensive research through focus groups and prototype testing studies validated that the new format is going to be a runaway success with our readers. We also took the new format to the campus at Ohio State University and saw tremendous response from the young adult population – so much so, that this years subscription sales on campus doubled what we have had in the past few years – in fact – it was a record.

As a researcher it was amazing to see how consistent the responses were. Through all the studies conducted, more than 85% of our readers loved the new format and 70% preferred the new format over the current broadsheet.

So, the question was asked: How will our advertisers benefit from this format change?

Advertisers are excited & enthusiastic about the new format

We then took the sample prototype on the road and shared it with our key advertisers to see their reaction. Well, our advertisers are also our readers. When they first saw the format immediate reactions were very similar to the readers’ response in our focus groups: they leaned into the product, were more engaged, and noticed the various new features and especially new opportunities to place their message! In fact one of them went on say that “This is the format of the future”.

The Industry is watching

Since we made the announcement to go the “three-around” format, our newspaper executives have fielded numerous questions regarding the technology, process and research that went into making the decision - from publishers across the country as well as national / retail advertisers.

The question remains: Will others begin to adopt this new format? Before the end of Q1 2013, Cincinnati (a Gannett paper) will also be printed in Columbus at the Dispatch’s printing facility – in the new “three-around” format and shipped 100 miles south to Cincinnati – daily! Is that a model that the newspaper publishing industry will evolve into? Only time will tell.

All eyes are now on Columbus, OH – as the industry observers, advertisers and news readers across the country watch as we transition into this new format. An impressive marketing campaign is under way to educate, excite and invigorate the pride of the Columbus area residents in their 141 year old hometown newspaper – that will be the first sectioned compact newspaper in the world!

Welcome to the newspaper reinvented. Welcome to a whole new experience!