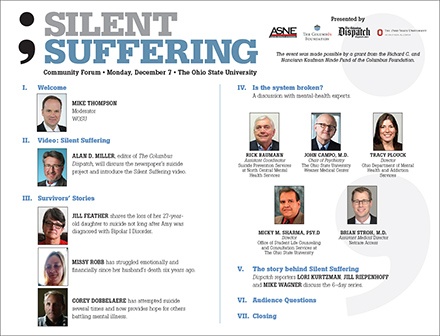 The 10th-leading cause of death in the United States is one that most people rarely discuss: suicide.

But when The Columbus Dispatch (a GateHouse Media Group publication) published “Silent Suffering,” a six-day, in-depth series on the topic of suicide, an amazing thing happened. People started talking about it.

In coffee shops. At church. On social media. On the phone with suicide-prevention counselors. At the Ohio Statehouse. In Congress. And during a two-hour community forum the newspaper hosted on The Ohio State University campus.

In a unique collaboration with the American Society of News Editors, The Columbus Foundation, and The Ohio State University Wexner Medical Center, The Columbus Dispatch produced six installments from November 17-22, 2015.

Dispatch Digital News Editor Carrie Wise said, “We enjoyed strong referrals from our Facebook page, and most of the stories appeared in the daily reports of the top 10 most-viewed stories.”

The series and the public forum at Ohio State University were promoted through a combination of in-newspaper advertising, e-mail and hard copy invitations, social media, and online promotion.

Attendance at the “Silent Suffering” forum drew audience members from the medical, legal, and political arenas, as well as many people affected personally by suicide. Full reprints of the entire series were available at the event.

The panel included the Dispatch staff responsible for the series, medical experts, and the director of the Ohio Department of Mental Health and Addiction Services. Some of the most emotional discussion came from the three survivors’ stories that kicked off the event. They included a mother who lost her 27-year-old daughter to suicide, a woman who has struggled emotionally and financially since her husband’s suicide, and a man who after several suicide attempts of his own now provides hope for others battling mental illness.

Throughout the event and the audience questions, a common refrain was heard: “The work you did will save more lives than you’ll ever know.”

The Columbus Dispatch was applauded by the panelists and attendees for its coverage of an often forgotten and unspoken epidemic that claims a life every seven hours in Ohio and kills as many people as breast cancer nationally.